This is an excerpt from the chapter, ‘The Enemy Within’ in NIIANJAN MUKHOPADHYAY’s book, Narendra Modi: The Man, The Times.

From the label of “Master Divider” in India Today in January 2003 to the tag of “The Great Polariser” in the Outlook in July 2012 — Narendra Modi’s image remained static: self-declared champion of one community of people. But the strain Gujarat faced in the course of his tenure has increased manifold. Wherever I travelled in Gujarat, there was a clear distinction between “us” and “them”. This difference was articulated by several Hindus every time the conversation veered in this direction. In contrast, counterparts among Muslims denied this. The disagreement with the hypothesis stemmed not from a belief and perception that they faced no discrimination but because of a “fear” that accepting such a viewpoint could be interpreted as levelling an allegation that they were being targeted — a risk no Muslim is willing to take after the post-Godhra violence.

END_OF_DOCUMENT_TOKEN_TO_BE_REPLACED

This is the text of GIRISH KARNAD‘s speech at the Mumbai Literature Festival, as compiled by Outlookindia.com from various sources. 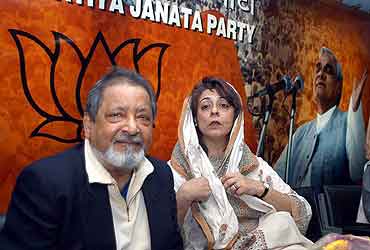 On Friday afternoon at the Tata Literature Live! festival in Mumbai, playwright Girish Karnad surprised audiences with an unexpected and spirited critique of Nobel laureate Vidia Naipaul. Naipaul was awarded the Landmark and Literature Alive’s Lifetime Achievement Award on October 31. Karnad was originally supposed to talk about “his life in theatre” in his session, but instead launched into a scathing critique of Naipaul and the conferral of the award to him

This is what he said at the festival:

At the Mumbai Literature Festival this year, Landmark and Literature Alive have jointly given the  Lifetime’s Achievement Award to Sir Vidia Naipaul.

The award ceremony held on the 31st of October at the National Centre of the Performing Arts coyly failed to mention that Naipaul was not an Indian and has never claimed to be one. But at no point was the question raised. END_OF_DOCUMENT_TOKEN_TO_BE_REPLACED

You may have seen this documentary film before. If you have, you will, I’m sure, want to see it again. It is not about Ram or Kabir. It is about you and me.

Had Anhad is a documentary film, part of the Kabir Project, released in 2008.

Kabir was a 15th century mystic poet of north India who defied the boundaries between Hindu and Muslim. He had a Muslim name and upbringing, but his poetry repeatedly invokes the widely revered Hindu name for God – Ram. Who is Kabir’s Ram? This film journeys through song and poem into the politics of religion, and finds a myriad answers on both sides of the hostile border between India and Pakistan.

Watch it on Culture Unplugged.