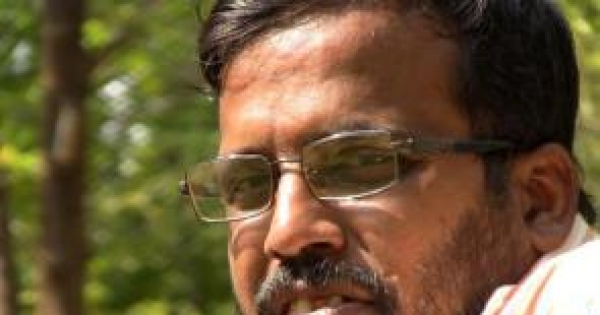 Debaranjan decided to stay back in the village for another day. In the early morning on March 18, 2016, he went out to a nearby riverside and while he was coming back, he saw two police men in civil clothes who came to him and took him. They did not allow him to change his clothes and forced him to go along with them in his lungi to the nearest police station at about 6.30 AM. END_OF_DOCUMENT_TOKEN_TO_BE_REPLACED

For me it was a belated realisation that the conference is taking place around sixth death anniversary of the legendary activist for human rights and for justice late K Balgopal, who played a key role in the formation of the Forum. It does not need underlining that late K Balagopal was a rare combination of a scholar – mathematician by passion and lawyer by commitment – and activist who not only broke new grounds in the discourse around civil liberties and human rights but did not hesitate to raise uncomfortable questions when the time came. One can still imagine the loss you all must have felt when he suddenly left six years ago. As rightly mentioned by the late K G Kannabiran in his obituary then, how he was ‘one in a century rights activist’ who brought on agenda ‘jurisprudence of insurgence’. END_OF_DOCUMENT_TOKEN_TO_BE_REPLACED

Tsundur, Guntur, A.P. which had made headlines way back in 1991 when eight dalits were lynched by a 400 strong armed mob of Reddys is again in the news. The recent judgment of the A.P high court has overturned the judgment of the Special courts and has acquitted all the accused involved in the case for ‘want of evidence’.

As rightly noted by Human Rights Forum (HRF) the judgment is ‘brazen injustice’ and is ‘reflective of upper caste anti-dalit bias’ and ‘betrays insensitivity in the judiciary to an inhuman caste atrocity.’ It is expected that the state does not waste time in moving the Supreme Court to get this retrograde judgment overturned and render justice to the families of dalits.

What is more disturbing and shocking is the fact that when the Special Court formed to deliberate on the case had finally given its verdict seven years back, it was considered a ‘historic’ in very many ways. The conviction of the perpetrators – twenty one of the accused were life imprisonment and 35 of the accused were asked to serve one year rigorous imprisonment – was considered a significant milestone in the ongoing dalit emancipation movement. END_OF_DOCUMENT_TOKEN_TO_BE_REPLACED