[ This guest post marks one month of the 16th December massacre of school-children by Islamists in Peshawar, Pakistan ] 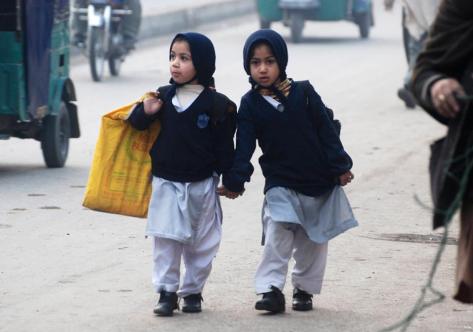 Pakistan has become a euphemism for insanity.  Doing the same thing over and over again and hoping for a different outcome. There are though some incredibly brave, thoughtful, humane and patriotic Pakistani men and women who have decided enough is enough and they are determined to chart a different future for the country. END_OF_DOCUMENT_TOKEN_TO_BE_REPLACED

Far away from Peshawar five men and a woman sat in a physician’s waiting room in Lucknow. The television screen that ordinarily shows some Bollywood film or a cricket match had a news channel on. It was day after the slaughter of children. The assistant who maintains the waiting list of patients and collects the doctor’s fee said something very predictable, even if heart-felt, expressing his horror and revulsion. The matter would have passed as unremarkably as most things do most of the times, except for what an elderly gentleman waiting to see the doctor had to say in response.

In a feeble yet firm voice whose conviction and sincerity was unmistakable, he said – dhaarmikata ko badhaava doge to kattarta badhegi; kattarta badhegi to aatank upajega, haivaaniyat saamne aayegi. (If you will promote religiosity, fundamentalism will grow, and from that will emerge terror and barbarism.) After a pause he added – hamaare desh mein bhee yahee ho rahaa hai, haalaan ki abhee hum pehle daur mein hain, dhaarmikata badhaane ke daur mein. (Same thing is happening in our country too, although we are in the first phase so far – that of promoting religiosity.) END_OF_DOCUMENT_TOKEN_TO_BE_REPLACED

I was last in Pakistan in 2006 during Ramzan. Rahul had some work in Islamabad, Peshawar and Lahore and I had used that as an excuse to visit my mother’s place of birth. While I had visited my mother’s beloved Lahore a few times earlier this was to be my first trip to Islamabad and Peshawar.

To cut a long story short, on our first evening in Peshawar, post iftaar, we found ourselves in the fabled Qissa Khwani bazaar, the Bazaar of Story tellers. It was here that in 1930 British troops had fired upon an anti-colonial demonstration of non violent, unarmed nationalist Khudai Khidmatgars leaving more than 400 amongst them dead. History has come a long way since then marking contemporary Peshawar as one of the more violence prone cities of Pakistan. END_OF_DOCUMENT_TOKEN_TO_BE_REPLACED

During Sikh rule in Peshawar, the Gor Khatri area of Peshawar was declared Governor House, so the Gorakh Nath temple here was abondened and Hindu families shifted to a close by residential compound called Christian Colony. Then during the British Raj, the government provided residential quarters to a Hindu family to look after the temple. END_OF_DOCUMENT_TOKEN_TO_BE_REPLACED