The democratic forces, organizations and the thinking minds of IIMC took part in a spirited protest today against the invitation extended to notorious ex-IG Kalluri by the IIMC administration to take part in a seminar. To start with, since last two days, there were several attempts on the part of the organizers to confuse/conceal Kalluri’s invitation. Immediately after the declaration of the protest, Kalluri’s name was dropped from the poster. There were also threats of counter-mobilisation by the BJP goons. But undeterred, as we reached the gates of IIMC at 11am, the site echoed with slogans of “Killer Kalluri Go Back”! 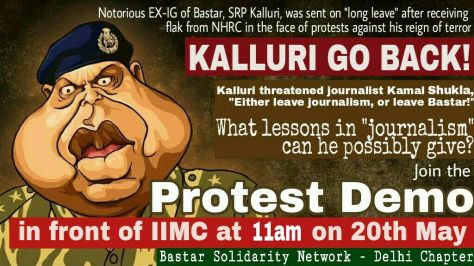