As the constitutional endgame approaches, Nepal is witnessing its most fierce and polarised political debate since the process to transform the state began with the Comprehensive Peace Agreement in 2006. Strikingly, it is not a battle between political parties, but different social groups.

This is the battle over the nature of federalism, the boundaries of future states, and the names and number of provinces. The issue of state restructuring perhaps resonates most among ordinary citizens, especially those belonging to communities excluded from the power structure due to their ethnic, caste, regional and religious identities. It is a battle that has been fought in Constituent Assembly (CA) committees, the State Restructuring Commission, and in the past week, on the streets. END_OF_DOCUMENT_TOKEN_TO_BE_REPLACED

Five years after a peace accord marked the end of a decade long civil war, Nepal’s political transformation has entered its final phase.

On May 27, 2012, the term of the Constituent Assembly — extended four times beyond its original two-year term — will expire. And this time, politicians will not find it easy to give the CA another lease of life due to a judicial stricture. The Supreme Court (SC) has declared that the current extension is final, and if the constitution is not promulgated, there should be another election or referendum. There is also rising popular pressure to wrap up the prolonged transition, which has been accompanied by abysmal service delivery.

That gives the political forces less than three months to wrap up the peace process and write a constitution. Together, this will shape the nature of Nepal’s political institutions and security apparatus. END_OF_DOCUMENT_TOKEN_TO_BE_REPLACED 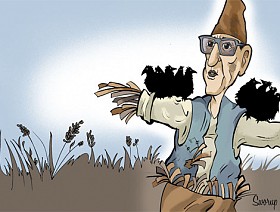 Kanak Mani Dixit’s efforts to portray 1990s as blissful, and Maoists to solely blame for all of Nepal’s ills, is revisionist history, facts be damned. Dixit’s rejoinder (‘The perils of executive presidency’, Jan 5) to my column (‘A question of form’, Jan 4) reveals fundamental differences in how we see recent Nepali history. The gist of Dixit’s rather simplistic world view is that the 1990s were wonderful and the Maoists destroyed it and are all evil. Let us examine this in more detail.

The 1990 constitution opened up Nepali society; it guaranteed fundamental freedoms and allowed groups to organise themselves at all levels; and economic policies pursued then led to the creation of a bigger middle class.

But there were two fundamental drawbacks of that period, which is what led to its eventual breakdown. END_OF_DOCUMENT_TOKEN_TO_BE_REPLACED

Exactly four years after a peace accord the end of Nepal’s civil war, the Unified Communist Party of Nepal (Maoist) is going through a deep existential crisis. This was most starkly reflected in the separate political documents presented by chairman Pushpa Kamal Dahal ‘Prachanda’, senior vice-chairman Mohan Vaidya ‘Kiran’, and another vice-chairman and ideologue Dr Baburam Bhattarai at an extended party meeting in Palungtar of Gorkha district last week. Almost 6,000 delegates – including 1200 Maoist combatants from UN-monitored cantonments – reviewed the party’s achievements and failures after entering the peace process, and discussed the future ‘political line’ the party should adopt. END_OF_DOCUMENT_TOKEN_TO_BE_REPLACED

India can continue to let its suspicion of the Maoists be the over-riding objective of its Nepal policy or seek to play a pro-active role in engineering the kind of consensus it has done since 2005.

First published in The Hindu yesterday.

Indian Foreign Secretary Nirupama Rao arrives in Kathmandu on her maiden visit today, at a time when Nepal is grappling with its most serious and prolonged political crisis since the peace process began. India has to make certain difficult policy choices, reconcile the contradictions between its stated aims and actions, determine whether it remains committed to the process it helped facilitate, and use its leverage accordingly.

The fragile Madhav Nepal-led ruling coalition faces a severe crisis of legitimacy and a belligerent Maoist opposition. The Maoists have boycotted the legislature-parliament, paralysing government business to the extent that the budget has not yet been passed. They have demanded a house discussion on President Ram Baran Yadav’s “unconstitutional action” over-riding the Maoist government’s decision to sack the then Army Chief General Rukmangad Katawal in early May — a demand rejected by the other parties in government who see no wrong in what the President did. The Maoists have also launched a street movement, with the slogan of instituting “civilian supremacy” and a “Maoist-led national government.” END_OF_DOCUMENT_TOKEN_TO_BE_REPLACED