The hectic discussion over the Kashmir meeting in Delhi in October entitled ‘Azadi – The Only Way’ has made it urgent to revisit the debate between Lenin and Luxemburg on the right of nations to self-determination. Lenin, starting from his experience in imperialist Russia, insisted on the right of nations like the Ukraine to self-determination (in the sense of their right to form separate states), contending that denial of this right would merely strengthen Great Russian nationalism. In a colonial situation, Lenin was surely right. When a country is under foreign occupation, all sections other than a very small number of collaborators want to be free of the occupiers, even if there are sharp differences between these sections. A striking example is RAWA (the Revolutionary Association of the Women of Afghanistan) which, despite speaking for a section of the population which is sorely oppressed by the Taliban, and continuing to fight against it, nonetheless shares with the latter the goal of ending the occupation by US and NATO forces. In such situations, the right of an occupied nation to self-determination makes sense.

END_OF_DOCUMENT_TOKEN_TO_BE_REPLACED 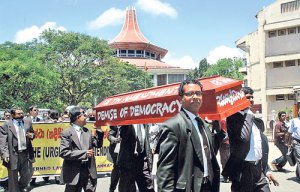 Different sections of Sri Lankans protest against the 18th Amendment

Sri Lanka’s claim to be a democracy has been tenuous for years, but the passing of the Eighteenth Amendment to the Constitution by parliament on 8 September 2010 dealt it a fatal blow. It changed Sri Lanka into a de facto dictatorship like Zimbabwe and Myanmar, where it is abundantly clear that elections alone cannot unseat Mugabe or Than Shwe.

END_OF_DOCUMENT_TOKEN_TO_BE_REPLACED

To people desperately trying to avert a bloodbath in the forest belt, the recent PUDR statement on the massacre of 76 CRPF jawans in Dantewada caused considerable consternation, and Sumanta Banerjee’s response to it even more so. According to the PUDR statement,

‘As a civil rights organization we neither condemn the killing of security force combatants nor that of the Maoists combatants, or for that matter any other combatants, when it occurs’.

Sumanta Banerjee objected to the equating of Maoist violence and state violence, saying that

‘these soldiers, by being cannon-fodders of the Indian state, however tragic it might be, suffered the fate that – I’m sorry to say – they deserved…To come back to the latest incident of the Maoist attack on the CRPF camp in Chhattisgarh…. if we accept it as a part of a civil war, such killings are inevitable (just as the CRPF killings of Maoists) in a violent system that has been institutionalized by the Indian state. The difference between the CRPF violence (involving ‘false encounters’, raping of tribal women, burning their homes, etc.) on the one hand, and the Maoist violence on the other (which means attacks on oppressive landlords and the police and para-military forces like the CRPF which come to the aid of the landlords) – has to be distinguished by civil society groups’

Both the statement and the response assume that a civil war is already in progress, and therefore the killing of combatants is not illegal.

SOUMITRA GHOSH is with the National Forum of Forest Peoples and Forest Workers. This post came as a response to Rohini Hensman’s recent post Getting Indian Democracy Right

Is India a democracy? This question has to be seen in context of the complex and plural character of the present Indian state and several other state like formations(for instance the Maoist People’s Sarkar in the liberated zones, the parallel administration run by the Nagas, areas and times where and when the extreme hegemony of one or the other mainstream political party or the feudal landlords substitutes the process of law—and others). There is also the fallacy whether India is a nation-state in the way other nation-states(for instance, China, USA, England) are, and whether the concept of a monolithic Western-type at all democracy applies in the Indian context (and if so, how far?). However, the question Rohini tries to raise deals more perhaps with our ethical constructs of democratic values than the character of the Indian state. If it is the former we enter the realm of ethical a-priories, which I too share: democracy is something that as a political process tolerates pluralism and leaves some space for minority dissents against dominant majorities. To take the democracy debate further and to include the Indian state in it will mean a different discourse, in which I am not going for the time being.

END_OF_DOCUMENT_TOKEN_TO_BE_REPLACED

‘Far away, in that other fake democracy called India’: so said Arundhati Roy in a passing reference to India when she began her talk at the finale of the Left Forum 2010 in New York in the middle of March. Fake democracy? Yet in the same month her long essay ‘Walking With the Comrades,’ supporting the struggle of the CPI (Maoist) in the tribal areas, was published by a mainstream, corporate-controlled Indian magazine, Outlook. How would that be possible if India were just a ‘fake’ democracy? By way of a comparison, across the border in Sri Lanka, the March issue of Himal Southasian was seized by customs on account of an article of mine, despite the fact that I have always been sharply critical of the insurgencies of the LTTE and JVP, and cannot by any stretch of the imagination be described as sympathetic to terrorism or violence. Earlier editions of Himal with articles by writers critical of both the government and the LTTE have suffered the same fate. My articles have been turned down by one newspaper after another in Sri Lanka, and I do not blame their editors and owners: so many journalists, editors and owners who have been critical of the regime in power have been jailed, killed or disappeared, even if they, too, had been critical of the LTTE. END_OF_DOCUMENT_TOKEN_TO_BE_REPLACED