Excerpts from an article published in The India Forum. Link to whole article given below.

A powerful analysis of the injustice of the prison system in India (in which 70 percent of the incarcerated are under trial), the authors PRATIKSHA BAXI and NAVSHARAN KAUR make an argument for recognizing women, as well as gender and sexual minorities, as ‘custodial’ minorities.

We argue that all women inmates may be defined “custodial” minorities. As per the 2020 statistics we collated, there are 68 persons incarcerated under the category “others”. No grave threat is posed to society by UTPs belonging to sexual and gender minorities that non-custodial alternatives cannot be found for them, while they wait for investigations and trials to be over. And alternatives to prison system need to be innovated for all convicted women, and gender and sexual minorities. There does not seem to be an attempt to recognise that their right to health and life is made far more precarious in a transphobic prison-medical complex. They must be counted and accounted for…

All women in prisons without distinction of charge, crime or sentence, whether pregnant, lactating, menstruating or menopausal, differently abled or ailing may be thought of as “custodial” minorities. Muslim women face terrible targeting and blame, as do Dalit women who face intolerable discrimination and bear the brunt of misuse of law against them. Similarly, Muslim and Dalit male undertrials are also subjected to sexualised forms of torture in police and judicial custody. And policies that exclude foreigners from interim bail position them as custodial minorities, who face institutionalised racism. However, the law has difficulty in “seeing” these prison inmates, especially undertrials, as custodial minorities.

END_OF_DOCUMENT_TOKEN_TO_BE_REPLACED 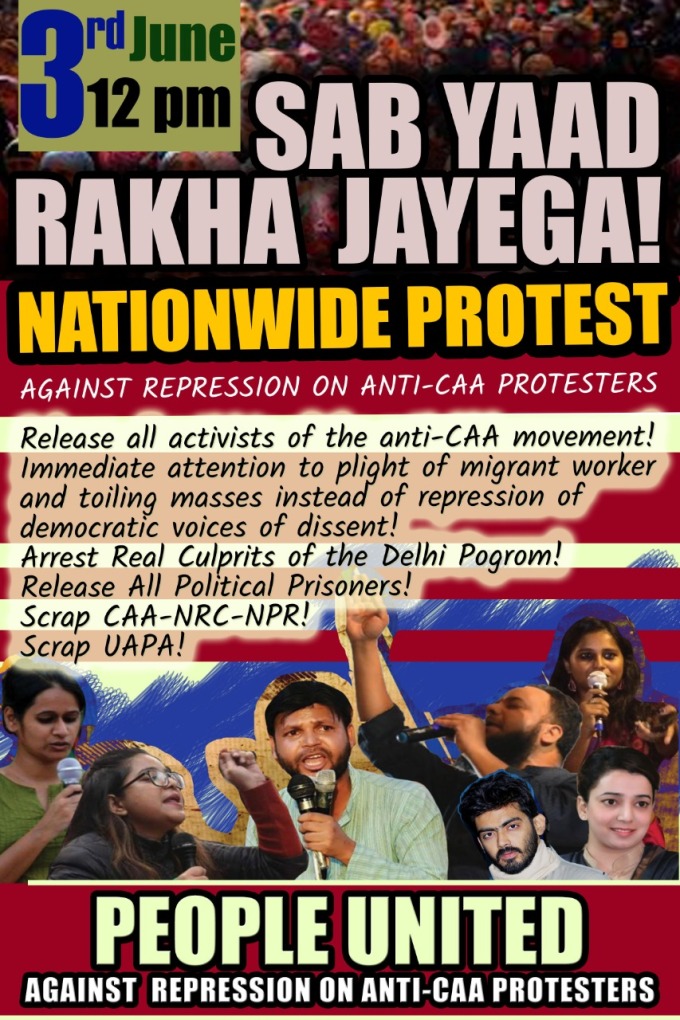 Over the past two months the Delhi Police has arrested Jamia students Safoora Zargar, Meeran Haider, Asif Iqbal Tanha, JNU students Natasha Narwal and Devangana Kalita along with activists Ishrat Jahan, Khalid Saifi, Gulfisha Fatima, Sharjeel Imam and hundreds of other Muslim youth. Some among them have been booked under the amended UAPA as a means of punishing the widespread protests against the CAA-NRC that emerged across the country in December last year. Most recently AMU students Farhan Zuberi and Ravish Ali Khan have been arrested by the UP police for participating in the anti-CAA protests. It is clear that the spate of arrests are far from over and new names of democratic activists are likely to be added to this already long list. Meanwhile those openly advocating violence against peaceful protesters such as Kapil Mishra, Parvesh Verma and Anurag Thakur have gone scot-free. END_OF_DOCUMENT_TOKEN_TO_BE_REPLACED

The fight for half the Earth and half the sky is never at rest around the globe. Women of the world are constantly fighting their oppressors in different colours. The debate around #BoisLockerRoom stories on Instagram and the trolls concerned about the marital status of a pregnant woman in jail, for practising her right to protest are of similar nature.

In 2017, The Jawaharlal Nehru University’s administration under the command of Vice-Chancellor M Jagadesh Kumar arbitarily dismantled the GSCASH (Gender Sensitization Committee Against Sexual Harassment). At the same time, women of Banaras Hindu University (BHU) were leading the movement against sexual harassment.

Today, when a pregnant student activist is fighting for her rights inside the jail, some women are continuing to resist and expose a group of young boys, by revealing the screenshots of an Instagram chat screen, where the participants of the group named ‘Bois Locker Room’ shared some non-consensual pictures of women as well as underage girls. After the screenshots went viral, these boys expressed their anger by suggesting gang-rape of all the women who shared it. On the other hand, Safoora Zargar, a research scholar of Jamia Millia Islamia, who was associated with the Jamia Coordination Committee (JCC), and was part of the anti-Citizenship Amendment Act protests organised by university students in December and January has been charged under Unlawful Activities (Prevention) Act (UAPA) and is send behind the bars. She has been arrested for allegedly leading the anti-CAA protest at Jaffrabad metro station in February.  Turning a blind eye to the medical condition of the student, the trolls are busy assassinating her character. END_OF_DOCUMENT_TOKEN_TO_BE_REPLACED

DENOUNCE false narratives that try to link anti-CAA protests with the violence in Delhi.

DENOUNCE false narratives that try to link anti-CAA protests with the violence in Delhi.

DEMAND an immediate stop to targeting of Muslim women activists
under the shadow of the Covid 19 lockdown.

SEEK ACTION against actual perpetrators of violence, not peaceful protestors.

STAND FIRM with the conscience keepers of the nation

We, the undersigned, strongly condemn the brazenly malicious attacks, arrests and intimidation by the Delhi Police of Muslim women, students and activists, as well as other citizens who have spoken up against the unconstitutional moves of the present ruling dispensation. Media reports that about 800 + anti-CAA protesters have been detained or arrested since the Covid 19 lockdown, which means they have had little or no access to lawyers and legal aid, and their families given no information of their whereabouts for extended periods after they were in custody. The impunity with which the Delhi Police is carrying out this sweep under direct orders from the Home Ministry is facilitated by the reduced media, public and legal scrutiny under the lockdown.