As individuals and groups who have been engaged in the struggles for women’s rights, safety and justice, it is often presumed that we would support the demand for death penalty for sexual assault. But for decades, even as we have consistently fought to make the world safer for women through changes in policy and law, and social awareness by breaking the silence on these heinous crimes, we have consistently argued against the death penalty for sexual assault, as well as, all other crimes.

In the light of the death warrant being issued on 7 January 2020 against Akshay Kumar, Vinay Sharma, Pawan Gupta, and Mukesh Singh convicted of the brutal assault, gangrape and murder of a 23-year old medical intern in Delhi in December 2012, we reiterate our position against the death penalty. END_OF_DOCUMENT_TOKEN_TO_BE_REPLACED

Yakub Menon was murdered yesterday morning. Apparently it was his birthday. When his brother Suleman and his cousin Usman met him on Wednesday afternoon his words to them, as reported in today’s Indian Express, were – “Agar woh mujhey mere bhai ke gunahon ke liye sazaa de rahe hain, toh mujhe kabool hai. Par agar unko lagta hai ki mein gunehgaar hoon aur sazaa de rahe hain, toh yeh galat hai. Main bekasoor hoon.” (If they are punishing me for the sins of my brother, then I accept this verdict. But if they are punishing me because they think I am guilty, then it is wrong. I am innocent.)

END_OF_DOCUMENT_TOKEN_TO_BE_REPLACED

Guest Post by Concerned Women, Womens’ Groups and Others against the Death Penalty Awarded to Surinder Koli

The President of India

Subject:  Execution of Surinder Koli Would be a Travesty of Justice:
Plea for Mercy from Women’s Groups, Lawyers, Academics, Students and Activists

As women who have been engaged in the struggles for women’s rights and justice, (and their allies) we appeal to you to commute Koli’s death sentence or at least to stay his execution till the completion of the other cases involving other Nithari victims in which he is an accused.

END_OF_DOCUMENT_TOKEN_TO_BE_REPLACED

The anger that I felt when a young woman was brutally raped and killed by a group of men on the night of December 16 last year is not something that will ever go away. It marked not just me, but millions of people in Delhi, and elsewhere. That anger has no closure. Nor do I seek the convenience of such a closure. I do not seek the convenience of closure for the rape and murder of dalit women in Haryana, or of women in Kunan-Poshpora and elsewhere in Jammu & Kashmir or in Manipur who were raped and killed by the soldiers of the Indian army and who are still unpunished. I would like such men to be punished, but I will never demand the penalty of death for them. Not because I have any affection for rapists, but because I have a greater regard and respect for human life, which I do not think that we should allow the state to take away, in cold pre-meditation, whatever the circumstances.

END_OF_DOCUMENT_TOKEN_TO_BE_REPLACED

I met Sarabjit Singh’s brave lawyer Awais Sheikh in Delhi some months ago, where his book was released. He was very confident Sarabjit wouldn’t be hanged. As was Justice (Retd.) Katju, who launched the book. Justice Katju said there was no point campaigning for Sarabjit’s release until the Pakistan elections were over. I got a similar impression of optimism from people who had been following the Sarabjit case.

Well, they were right. Sarabjit wasn’t hanged. But hanging is only one way of killing. END_OF_DOCUMENT_TOKEN_TO_BE_REPLACED 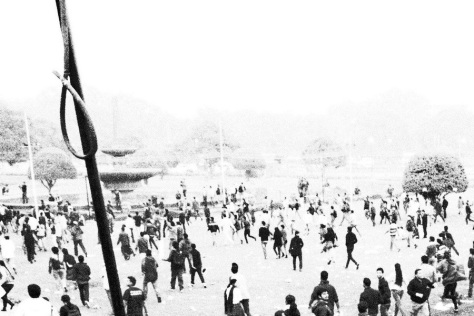 Ever since the news of Afzal Guru’s execution broke out on the 9th, I have witnessed my personal space descend into a state of chaos. I woke up that morning to a number of emails/facebook messages by friends requesting me to join them at Jantar Mantar to protest against Guru’s execution. Many called that particular protest farcical, some even going to the extent of labelling these young men and women as traitors. Battle lines were drawn and a country stood divided. The more I thought about the execution, the more it saddened me. I could see myself and people like me (the ordinary citizens of this great nation) as pawns in a game of ugly power play, waiting to be sacrificed at the altar of ‘opportune moment’. END_OF_DOCUMENT_TOKEN_TO_BE_REPLACED

Senkodi, a 20 year old woman, part of Makkal Mandram a commune in Kancheepuram immolated herself outside the collector’s office on the 29th of August in Kancheepuram. She left a letter saying that it was in solidarity with the campaign against the death penalty awarded to Perarivalan, Murugan and Santhan in the case relating to Rajiv Gandhi’s killing. Growing up in the commune Senkodi was part of the struggles that were around her such as those for land and other rights of marginalised communities. Much has been written about her both maligning her and her comrades as well as hailing her ‘martyrdom’. Below is a piece that brings into question the reasons for her death and the reactions to it. It is translated as accurately as possible in language and tone from it’s original Tamil version. It is a piece written to raise questions within progressive spaces in tamilnadu, but can be easily read into similar contexts.

Guest post by PREMA REVATHI
Translated from the Tamil by Ponni

The human heart is a strange creature. The utter helplessness and pathos I felt after I heard of the death of Senkodi reminded me of lines I had heard ages ago which stuck with me;

END_OF_DOCUMENT_TOKEN_TO_BE_REPLACED

Two Sri Lankans and an Indian national convicted for the assassination of India’s former Prime Minister, Rajiv Gandhi, are facing imminent execution in Vellore prison in Tamil Nadu, India. This follows the rejection of their mercy petitions by the President of India. If carried out, these would be the first executions in India since 2004.

Murugan and Santhan, both 41, and Arivu alias Perarivalan, 37, were sentenced to death in January 1998 by a Special Anti-Terrorist Court on grounds of involvement in the assassination of India’s former Prime Minister Rajiv Gandhi. Their sentence was confirmed by the Supreme Court of India in May 1999. According to information received by Amnesty International and reports in the Indian media, their mercy petitions were rejected by the President in August 2011, following the advice of the Government of India.

The rest of the petition is available here. The petition opens in German, but you can use the option on the top right to change to English.