Purity and corruption has remained one of the recurrent themes in the entire history of Islam. The arrival of Islam in Arabia did not mean a radical departure from the past. Wael B. Hallaq, a noted scholar on Islamic law and Islamic intellectual history establishes through his commendable work that “much of Arabian law continued to occupy a place in the Shari’ah, but not without modification.” Prophet Mohammed, who founded this new faith by introducing new nomos, also let several old customs and institutions to remain unchallenged. Despite his critical attitude toward the local social and moral environment, Prophet Muhammad was very much part of this environment and was deeply rooted in the traditions of Arabia.

Though the new converts to Islam entered into a new cosmological order, they at the same time, continued to adhere to the practices of old pagan culture. Since the arrival of Islam many individual reformists or reform movements have intended to reform Islam and decontaminate it from its ‘accretional’ aspects. These reformative endeavours envisaged a Muslim community that is not only socially distinct but also repudiates the pre-existing cosmological order. However, so far, there has been no end to this conflict. This conflict between the formal ideology of reformists (Textual Islam) and functional behaviour of the majority of the Muslims (Lived Islam) continues till today. END_OF_DOCUMENT_TOKEN_TO_BE_REPLACED

In the past decade, the efforts of women in communities of Muslims to claim leadership roles within their communities of worship have animated heated debates around the role and place that Islam ascribes to women. Questions of whether women are allowed to call congregants to prayer (adhaan), deliver sermons (khutba), lead prayers, and participate in mixed-gender prayer with women and men standing side-by-side are religiously permissible acts have been thrown up into the air, gaining support from some Muslims, and intense resistance from others. Within the United States, these contemporary debates can be traced back to a mixed-gender Friday prayer service led by Dr. Amina Wadud at Synod House of the Cathedral of St. John the Divine in New York in 2005.[1] Numerous women-led prayer sessions have since taken place in cities across the United States, and in various global locations such as Toronto and Barcelona.[2] Widespread condemnation, heresy charges, and death threats swiftly followed some of these acts of defiance by Muslim women who are tired of being excluded from and/or given marginal spaces/roles within mosques for prayer, i.e. usually behind men or in less than ideal spaces where it is difficult to see/hear the sermon (khutba). Nonetheless, voices of support and acceptance are also prevalent—not that the women trailblazing this mode of leadership in ritual practices need anyone’s approval. It is into one such space—a newly created women-only Friday prayer organized by the Women’s Mosque of America—that we made our way on May 22, 2015 in Los Angeles. END_OF_DOCUMENT_TOKEN_TO_BE_REPLACED

Every sane person is aghast to see what has happened in Peshawar, where Taliban’s attack on a school has crossed all limits of savagery and senselessness. They killed over 140 innocents mostly children, after taking them hostage, burned a teacher with gasoline and made the students watch the ghastly act.

Historically the area is part of the region known as ‘Khorasan e Buzurg’ or the greater Khorasan spanning over the so called North West Frontier, Afghanistan, North East Iran and erstwhile Emirate of Bukhara. The area, for thousands of years, has been the heart and mind of Asia; as this was the region where Gathas of Avesta and Vedas were compiled, Buddhist teachings flourished and survived, Persian traditions were revived, the seekers of truth flocked around Sufi masters to be enlightened. This is the land that produced personalities like Zarathustra, Panini, Alberuni, Khwaja Ansari, Data Ganj Bakhsh, Khwaja Gharib Nawaz, Rumi, Jami, Rahman Baba and hundreds of others. Scores travelled to the region to seek knowledge and training like Faxian, Xuanzang, Yijing, Shams Taprez (Tabrez), Amir Khusraw, Guru Nanak, Jamali and countless others. Though the region has seen occasional strife in the past too but the traditions of inclusion had continued to prevail till about a couple of centuries ago, when these values began to face systematic attacks. A few like Bacha Khan, in his autobiography, gauged the extent of the spread of these exclusionist ideas and warned against them. END_OF_DOCUMENT_TOKEN_TO_BE_REPLACED

[ Salmaan Mohammed, a twenty five year old philosophy student was arrested in Thiruvananthapuram on 19 August 2014 for sedition, and for allegedly dishonouring the national flag and national anthem. The complaint against him originated as a response to his refusing to stand while the national anthem was played in a cinema during a screening. Salman is currently out on bail, but still faces the prospect of a life term in prison if he is found guilty of sedition by the judicial process. We at Kafila have been in touch with Salman and he has recently sent us a translation of an audio interview he did after coming out of prison on bail so that the world outside Kerala (and those who do not read or speak Malayalam) can understand what he has been thinking.]

END_OF_DOCUMENT_TOKEN_TO_BE_REPLACED

This is a guest post by ANAND VIVEK TANEJA 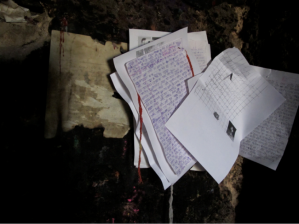 In the discussion around Aarti Sethi’s essay on Remembering Maqsood Pardesi some very important questions arose. As these questions are directly relevant to my work, but also to the larger concerns of the Kafila community, I decided to dwell on them at some length. As these reflections were written in response to the comments of one particular person, I address him directly in what follows below.

In your comments on Aarti’s essay, you say the following things about my work:

The tragedy of secular moderns of India is their fascination with Islam… And it appears secular modern Hindus are too busy analyzing jinns of Delhi, which is really sad!

… what do I do with the knowledge of emerging liberal ideologues working for the empire writing enchanting texts about chattan baba or the jinns?

I think that your opening statement is profound. But to understand its true depth, we need to revisit the terms “secular”, and “modern”, as well as our understandings of “Hinduism” and “Islam.” As an entry point into these questions, I will address your (rhetorical) question about what one should, and can do with “enchanting” texts about jinns. END_OF_DOCUMENT_TOKEN_TO_BE_REPLACED

Many Interpretations are Still Better Than One

[Hasan Suroor suggests in an op-ed that one of the causes of Islamist violence is the ambiguity of the Quran and the hadith, adding that perhaps it is time to develop an “authorised” version of the Islamic tradition. This article critiques Suroor’s assumption that it is possible to achieve a “pure” interpretation of a text, whether it be from a religious tradition or otherwise. In addition, it argues against Suroor’s tendency to imagine violence as a “medieval” phenomenon, and world-history as a deterministic forward-moving arrow.]

Hasan Suroor suggests that the problem of Islamist fundamentalism and the violence that follows in its wake can be solved by untangling the multiple interpretations of ambiguous Islamic texts. In his op-ed in The Hindu (29 September), “Islam and its Interpretations,”  Suroor points out this apparent paradox: that although on the one hand Muslims cite verses and hadith that provide injunctions against violence, on the other hand a more violent strain of believers (such as the Taliban) are also able to cite Quranic verses and hadith that justify their violence. The problem, he claims, does not lie completely with the manner in which Islamic texts are interpreted, but instead with the fact that the Quran is an extremely ambiguous text, arranged athematically, and whose meaning is often dependent on the context of each individual revelation. More so the hadiths, written down from the sayings of Mohammed, are of variable authenticity. The lack of a single authoritative version of Islamic texts, says Suroor, leaves the tradition “open for fanatics to distort at will.” END_OF_DOCUMENT_TOKEN_TO_BE_REPLACED

The Apex Court judgment of December 11, putting aside the Delhi High Court order on decriminalisation of homosexuality, pertaining to Section 377 of the IPC has clearly divided into two ‘queer’ camps, where on one side besides LGBTS are those liberals extending their support to the LGBT cause, and on the other side, there are religious leaders and groups, who otherwise would not even see eye to eye with each other (what is ‘queer’ about this second camp is not so much its sexual orientation, as the strangeness of its banding together against queer people despite their antagonism toward each other).