…it takes an error to father a sin. ─ J. Robert Oppenheimer[1]

Future historians of India may well describe the past year as a year of political sin. This was the year in which the man who had earlier presided over the Gujarat Carnage was awarded the ultimate prize. The year saw an election that touched a new low marked by shallowness, vulgarities and lies – in no small measure by the labors of the man himself. Equally appalling have been the exertions of a large class of literati and glitterati to portray philistinism and inanities spouted by the most powerful mouth as wisdom of a visionary leader.

An entire country seems to have gone blind – unable to see that the emperor has no clothes. In this age of incessant television it should be obvious to anyone that the supreme leader does not carry conviction even when enunciating relatively higher banalities. He is at his natural best only when he mocks someone as a shehzada or slanders and vilifies an entire community through phrases such as ame paanch, amara pachees. It is an irony of history that the republic which had Nehru as its first prime minister has one now for whom even common mythology is too cerebral. He must vulgarize Pushpak Viman and Ganesha and reduce them to quackeries of aviation and surgery.

Misfortune of the nation goes beyond the man. Forces of the diabolic housed in the hydra-headed Parivaar can now accomplish the impossible. They can now occupy the political center stage without leaving off the lunatic fringe. They can adopt Gandhi without renouncing Godse; erect world’s tallest statue of a leader who had punished their forefathers for assassinating Gandhi; even co-opt Bhagat Singh without batting an eyelid about what he stood for and what he had to say about ideologies like theirs. They can further refine the art of doublespeak. Their “statesmen” can pave the way for corporate plunder and call it sab ka vikas (development for all). Their “ideologues” can advocate sab ka saath (inclusion of all) by exhorting Hindu women to give birth to a minimum of four children each, lest Hindus are reduced to a minority “in their own country”. END_OF_DOCUMENT_TOKEN_TO_BE_REPLACED

The margins just got bigger. Many among those who customarily inhabit the centre have been pushed to the periphery. They are not my concern. There are analyses galore about why and how this has happened. I am not going to add one more to those. Margins exist on all sides. They encircle the political mainland from left and from right. Some might say there are no margins on the right. Everything on that side is mainstream. In any case, I will have little to say about the margins on the right.

My concern is with the left-side margins that now harbour the entire Left, although it is perhaps too soon for much of the traditional Left to acknowledge that. They are not likely, in any case, to listen to those of us who have spent a lifetime on the margins – partly because of our own follies and frailties but also because we have refused to succumb to the unsavory demands of the times. It is, after all, not our fault that we are born in a valley of historical time where the descent on the slopes of past glories has already come to an end and the ascent to the future ones is yet to begin. END_OF_DOCUMENT_TOKEN_TO_BE_REPLACED

Last month, I spent a fortnight in Morocco speaking to people about the aftermath of the Arab Spring. The Moroccan establishment has spoken often of “The Moroccan Exception” – where the King acted quickly to usher in reforms and  defuse the protests.

Yet, many – such as the two young people in this photograph – feel that the reforms were largely superficial.

El Haked – or The Spiteful One – is young rapper from Casablanca’s working class neighbourhood of Oukacha. He was arrested yesterday for singing and uploading songs critical of the King and the establishment. My article on him, His songs on Youtube

The Arab Spring demonstrations in Tunisia, Egypt, Libya, Bahrain, Yemen, Syria, Jordan, Morocco were hailed in much of the democratic world. However the Occupy Wall Street protests, which till date have spread to 100 cities in the United States and 1500 globally have met with mixed response.

The Arab people are fighting for democracy, and thus their resistance must be respected and supported. But the OWS folks, proudly leaderless and having framed no concrete demands are vulnerable to all manner of criticism, even from those expected to be supportive. Bill Keller, the former editor of arguably one of the most influential newspapers in the world, the ostensibly liberal, New York Times derides,  “the Occupiers have been pandered to (“Love your energy!”); patronized (“Here, I’ve drafted you a list of demands …”); co-opted by unions, celebrities and activists for various causes; demonized by the right; arrested and tear-gassed in some cities; and taken lightly by the likes of me”.

However the uprisings in the Arab nations, the OWS demonstrations and even the wave of anti-corruption protests that swept India this year are all ultimately an expression of people’s resistance to disenfranchisement. Whether it’s those fighting for democracy or those who find themselves powerless in face of a system that’s been hijacked by the illegitimate nexus between the financial and political elite (the metaphorical 1%), the underlying sentiment is a demand for fair play and the right of self-determination. END_OF_DOCUMENT_TOKEN_TO_BE_REPLACED

This guest post by ALIA ALLANA, a despatch for Kafila from Cairo, is the eleventh in a series of ground reports from the Arab Spring. Photos by Alia Allana

END_OF_DOCUMENT_TOKEN_TO_BE_REPLACED

This guest post by ALIA ALLANA, a despatch for Kafila from Cairo, is the tenth in a series of ground reports from the Arab Spring. Photos by Alia Allana 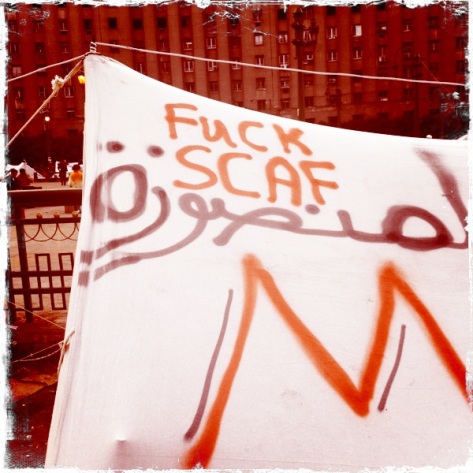 A week into protesting, the revolution became about preservation lest someone forgets.

Mohammed Mahmoud Street, the sight of intense fighting was officially off-limits for protestors. A concrete wall separated the protestors and police. Atop the wall army soldiers kept guard. The aim was simple: to keep protestors from barging past and facing-off with the authorities, like they had done for the past few days. But sometime in the night, a maverick with a graffiti can had his way and the beige concrete wall now read, “Change is coming soon.”  END_OF_DOCUMENT_TOKEN_TO_BE_REPLACED

This guest post by ALIA ALLANA is a despatch from Cairo for Kafila, the ninth in a series of ground reports from the Arab Spring. Photographs by Alia Allana

The police lobbed another tear gas canister and soon the feeling of suffocation would take over. But he didn’t move, instead he stood in the center; he continued to wave the Egyptian flag. The sound of rubber bullets being fired drowned under the sound of the drum. The drum was the harbinger of doom: when it was sounded by protestors, when the cacophony cut through the air, the message was simple – run, run as fast as you can because the police would begin their attack, again.

END_OF_DOCUMENT_TOKEN_TO_BE_REPLACED

This guest post by ALIA ALLANA is a despatch for Kafila from Cairo, the eighth in a series of ground reports from the Arab Spring. Videos and photos by Alia Allana

Tahrir Square had been quiet for the earlier part of the day today. The Sunday afternoon saw couples strolling, a mother carried her sleeping child, his face was buried in her bosom, scooters with loud speakers blared music.  There was no chanting and very few slogans. Small and sporadic groups of people protested. They called for change.

END_OF_DOCUMENT_TOKEN_TO_BE_REPLACED

This guest post by ALIA ALLANA, a despatch from Istanbul, is the seventh in Kafila series of ground reports from the Arab Spring. Photos by Alia Allana unless otherwise mentioned

Adib Shishakly’s rebellion starts with a small pin on his blue blazer.

Embellishing the the blue of his jacket, clipped on to the left collar is a flag of Syria not seen since the days following the French mandate. Today the flag flies in the besieged areas of Homs, Hama and Dera’a where the protestors have posed Bashar al Assad’s regime with it’s biggest challenge to date. It’s this very flag, with its three golden stars that was outlawed by the Ba’ath Party, by strong man Hafez al Assad.

END_OF_DOCUMENT_TOKEN_TO_BE_REPLACED 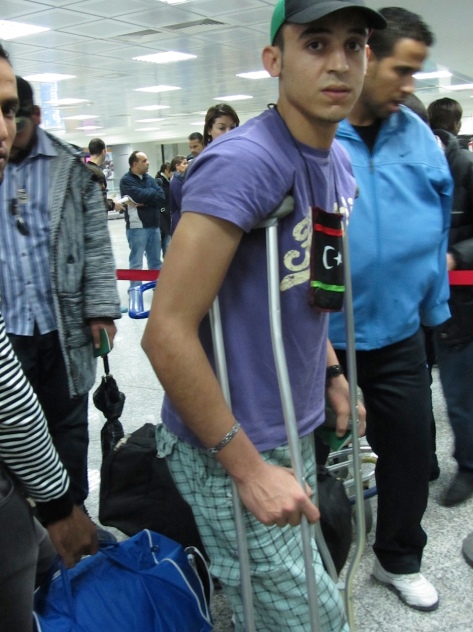 When does a boy become a shabaab?

Literally, in Arabic, shabaab means young men. Before the fever of the Arab Spring raged in the minds of the youth, back when boys used to gather in squares aimlessly, girls eyeing them would call them shabaab.

But that was then; before the political architecture of the Arab world was reconstructed.

Today the shabaab are the disenchanted youth, the angry boys of Benghazi with deathly toys devoid of opportunity, angry at their condition, aware of the world through the Internet and their mobiles, acting out their rebellion. Today the shabaab, the rebels of Libya, want what they think is theirs: the right to self-determination, a say in politics and freedom.

END_OF_DOCUMENT_TOKEN_TO_BE_REPLACED

Out of all the outrageous questions I have asked in my life, this one has to be amongst the top ten:

“Are you a jihadi?” END_OF_DOCUMENT_TOKEN_TO_BE_REPLACED

They had already waited so long, what was a few more hours? END_OF_DOCUMENT_TOKEN_TO_BE_REPLACED

This guest post for Kafila by ALIA ALLANA from Sidi Bou Said on the outskirts of the capital Tunis captures the mood a day before Tunisia goes to the polls. Photos by Alia Allana

END_OF_DOCUMENT_TOKEN_TO_BE_REPLACED

This guest post by ALIA ALLANA is a despatch for Kafila from Damascus, the Syrian capital. All photos by Alia Allana

We were sitting in the Ministry of Protocol in Damascus and she tugged on her black pearl necklace and fidgeted with her black and white tweed jacket. She had more reason to be afraid, she said – not just because she was a woman but also because she is a supporter of the current regime.

END_OF_DOCUMENT_TOKEN_TO_BE_REPLACED

This guest post by ALIA ALLANA is a despatch for Kafila from Homs, Syria. All photos by Alia Allana 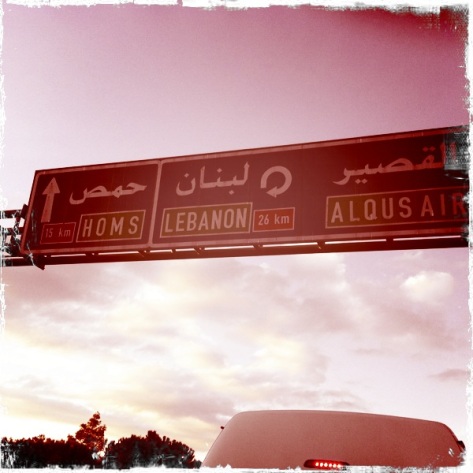 He was found shot in the chest, bleeding on the streets, alone.

He has no name. He’s just another struggling body in the hospital in Homs — only he’s much younger than most. He’s only four. He doesn’t move, his small frail body is gobbled by wires. The doctors say he hasn’t opened his eyes, hasn’t made a sound, nor has he called out for anyone. Saliva runs down his mouth but there is no one to wipe it off his face. This isn’t the first case and the doctors fear it won’t be the last. There will be other children who will take his place, there will be more victims of random shooting, more deaths and no one knows by whose gun.  END_OF_DOCUMENT_TOKEN_TO_BE_REPLACED