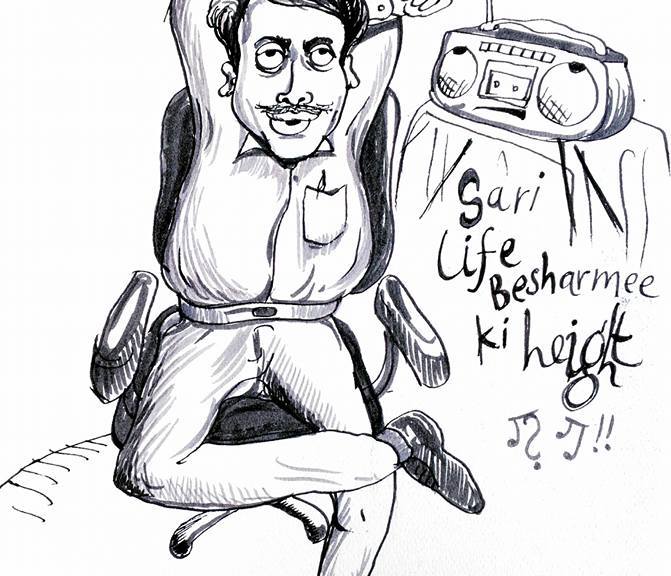 The 10th of May, the 13th Day of the Hunger Strike by JNU Students in protest against the HLEC Report was also the day scheduled for a meeting of the Academic Council of JNU. Students and faculty had resolved to stage a massive protest. Student and Faculty members of the Academic Council had also resolved to forcefully present issues related to the current crisis in the university at the AC Meeting. The events of the day are presented here through a series of videos and photographs uploaded by different people from JNU.

[ Video by Samim Asgor Ali, taken from his Youtube Channel ]

They tell the story of how students were generous with their tormentor, the VC, Jagadeesh Kumar, and how he ran away.

One day, his backers, Smriti Irani, Rajnath Singh and even Narendra Modi, and all the goons in the RSS headquarters at Mahal, Nagpur and Jhandewalan, Delhi will have to run for cover in a similar fashion when faced with the ‘gift’ of the fruits of their actions.

The students gathered on hunger strike collected their meals from their hotel messes and placed them in front of the AC meeting venue as a ‘gift’ to the Vice Chancellor, JNU and the university administration. END_OF_DOCUMENT_TOKEN_TO_BE_REPLACED

Students across universities in India are standing together against the extraordinary assaults unleashed on them by the Modi regime. Students in Jawaharlal Nehru University in Delhi have been having regular meetings, ever since 22nd March on the situation in Hyderabad. There have also been marches in Kolkata and meetings in TISS, Mumbai. Reports are just coming in of a police lathi (cane) charge on left youth and student activists in Mumbai. Again, the mainstream media is NOT reporting the fact that young people are being attacked and that seventeen of them have detained by the police in Mumbai for coming out in support of the students in Hyderabad. Kafila welcomes accounts from the participants of these gatherings, so that the students in Hyderabad get to know that they are not alone.

Some JNU students also took out a  protest march to the Ministry of Human Resources Development to register their strong protest against the police action in Hyderabad University on the 23rd of March. A big march is being planned in Delhi soon, which will have participation of many student organizations cutting across different universities in Delhi.

One effect of the media blackout on the Hyderabad situation is a silencing of the different voices of support and solidarity for the Hyderabad students from their comrades in Delhi, especially from JNU and other places. This is a tactic of the regime to make students in Hyderabad think that their struggle is not being supported and echoed in other places, such as in JNU, and in Delhi generally.

This is totally untrue. This is moment for even greater co-ordination and solidarity. Do not let yourself be distracted by those who want to divide the student movement at this critical juncture.

Watch the videos below, they have statements by Rama Naga, General Secretary of JNUSU, Anirban Bhattacharya (who was recently released from police custody together with Umar Khalid) and Shehla Rashid, vice president of JNUSU.

Thanks to the ‘We are JNU’ youtube channel and the ‘Stand with JNU’ Facebook page for the videos.