Two events altered his life forever. The first was when he witnessed a supervisor disrespectfully berating and kick a junior employee, which transformed a young apolitical physicist, who was passionately devoted to fundamental scientific research, into a tireless trade-unionist. The second – seeing his beloved adopted city Ahmedabad burn with tumultuous hate violence for many weeks in 2002 – thrust him into the heart of many battles against state power malevolently exercised against people of minority faiths. When Mukul Sinha succumbed to a particularly deadly stream of cancer in the summer of 2014, just weeks before Narendra Modi was swept to power, the country lost one if its bravest, most forthright voices for justice.

Raised in the railway enclave of the small district town of Bilaspur in Chhattisgarh where his father served, the young man had clearly worked out his chosen career as a scientist. After graduating in physics from IIT Kanpur, his elected life pathway seemed neatly laid out for him when, in 1973, he was accepted for his doctoral studies in plasma physics in the prestigious Physical Research Laboratory (PRL) in Ahmedabad. Founded in 1947 by the legendary Vikram Sarabhai, this apex space research institute undertakes fundamental research in physics, space and atmospheric sciences, astronomy, solar physics and planetary geo-sciences. This was where India’s first space satellite was born. It was a cloistered intellectual world, separated it seemed by light years from the turbulent life of fighting injustice which Mukul was to ultimately choose. END_OF_DOCUMENT_TOKEN_TO_BE_REPLACED

On January 2nd this year, management officials at the Sriperumbudur factory of NVH India Auto Parts Ltd, the Indian subsidiary of a Korean auto parts manufacturing company manhandled the company’s striking workers. The shocking visuals of the Korean managers of the company dragging workers on the floor and a manager standing over a worker holding him between his feet sparked outrage amongst civil society groups and caught the attention of the mainstream media.

The trigger for the strike was the suspension of 15 workers which their union alleges was without any reason. Several other issues festering for a long time also gave an impetus to the workers to go on strike. These include the lack of adequate toilet facilities. Apparently, there are only 6 toilets in a factory where more than 700 workers are employed of which only 4 are in usable condition. In a juvenile twist, the workers have to seek and secure the permission of the management officials each time they need to use the toilet. If this rule is violated in cases of emergency, warning letters are issued to workers alleging that they were found missing from their work spot. Another issue is the lack of a regular and sufficient supply of drinking water in the factory. The workers were also miffed at being under the glare of surveillance cameras all the time during their work hours. A very important issue that was a sore point was the management’s use of trainees and contract labour to perform production work of a regular nature. The workers were also upset at the attitude of the Korean management and the way they treat them.  They allege that there are instances of physical abuse where the management officials hit and slap workers and spit on their faces. Over and above all this, the permanent workers in the factory were peeved at the failure of the management to grant recognition to the union they had joined in 2013 and negotiate with the union.

END_OF_DOCUMENT_TOKEN_TO_BE_REPLACED

We express strong outrage at the Indian government’s reaction to the case of visa fraud and exploitation of her domestic worker against Deputy Consul General Devyani Khobragade in the United States. In its dealing of the case, the Indian government is only seeking to protect the dignity and honour of Ms. Khobragade, and has shown a complete lack of respect for the underlying issue – that of the abuse and exploitation of a domestic worker by a senior official. Ms. Khobragade’s father, Mr. Uttam Khobragade, is a politician and has a played a harmful role in suppressing the facts of the case and in diverting attention from it.

END_OF_DOCUMENT_TOKEN_TO_BE_REPLACED

This is a guest post by Bigul Mazdoor Dasta  Noida is one among those places which are highlighted as the hub of the ’emerging’ and ‘shining’ India. The glittery shopping malls, world class expressway, flyovers, F1 International circuit, luxury apartments, villas etc. are cited as the symbols of India’s ‘growth story’ and Noida has all of these. For the last couple of decades, the mainstream corporate media has been busy selling this growth story to the emerging urban upper middle class; in the process making them a customer of artificially inflated dreams such as having one’s own luxurious house. But, curiously, the harrowing stories of those whose labour power is responsible for this so called development are conspicuous by their absence in the mainstream media’s narrative. The labourers come into the news only when some untoward incident happens and they are immediately held responsible for any such incidents without carrying out any investigation. One such horrendous incident took place on April, 28 at one of the hundreds of construction sites in Noida in which the security guards of the site opened fire on the labourers and in the process injuring some of them. On the morning of the April 28, the workers of the 3C Lotus Panache company’s constructions site at Noida’s Sector 110 witnessed the naked reign of terror by the company’s management. At the beginning of the morning shift at around 8 a.m., the workers had reached the construction site to join the construction work of the multi-story apartment complex, but they had to stand in a big queue because the security guards at the gate were taking a long time to intensively check each worker and make an entry. When some workers protested against this lax attitude of the guards, saying that they had to listen to the supervisor’s abuses if they were late even by one minute, a heated exchange took place between the security guards and workers and suddenly the guards started firing indiscriminately over the workers. As per the media reports, two workers were injured, but when a team of Bigul Mazdoor Dasta visited the workers settlement adjacent to the construction site, some workers said that the number of the injured workers could be four which includes a child as well and one of the workers is seriously injured and his life is in danger. As per the records of the district hospital in Noida, only one worker was admitted on April 28. Other workers were admitted to some private hospital. 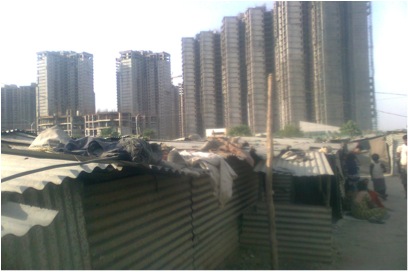 END_OF_DOCUMENT_TOKEN_TO_BE_REPLACED

We from the Maruti Suzuki Workers Union (MSWU) and our families continue to face not only an exploitative company management but also continous state repression since we started our agitation demanding justice and legitimate rights of workers.

This morning, Imaan Khan, one of the members of the Provisional Working Committee, MSWU, was picked up by the Haryana police while a Press Conference was underway, from outside the union office of Sarva Karmachari Sangh in Civil Lines, Gurgaon near Puspanjali Hospital.

END_OF_DOCUMENT_TOKEN_TO_BE_REPLACED

Guest post by MADHUMITA DUTTA and VENKATACHANDRIKA RADHAKRISHNAN
The writers are activists based in Chennai working on issues of land, labour, industry and SEZs.

Sriperumbudur grabbed media attention in 1991 when former Prime Minister Mr Rajiv Gandhi was assassinated during an election rally. Since then, this nondescript little village-town in west Chennai, dotted with paddy fields and large expanses of natural water-bodies, has transformed itself into a little ‘Shenzen’- world’s largest special economic zone in Southern China, which churns out one out of every eight mobile handsets sold anywhere in the world. Slated to attract investments worth $4 billion in electronics and automobile manufacturing, Sriperumbudur is now home to the largest mobile handset making factory of Nokia, a Finnish company that can churn out 7.5 lakhs handsets a day. This town and its neighbouring region is also known as the Detroit of India, churning around 12,80,000 cars every year. With a booming manufacturing industry and a promise of 2 lakhs jobs, Sriperumbudur is touted as the jewel in the industrial crown of Tamil Nadu. But of recent this seemingly success story has turned a little sour. END_OF_DOCUMENT_TOKEN_TO_BE_REPLACED

Guest post by MADHUMITA DUTTA and VENKATACHANDRIKA RADHAKRISHNAN
The writers are activists based in Chennai working on issues of land, labour, industry and SEZs.

S Ambika, a 22 year old woman factory-worker, died in the middle of the night in a posh hospital in Chennai on 31st Oct. She was a permanent employee of Nokia Telecom Special Economic Zone (SEZ) in Sriperumbadur in Kancheepuram district of Tamil Nadu. Her agonising death was due to a fatal accident at a panel loading machine in the factory.