[This missive to Makarand Paranjape, who is a professor at Jawaharlal Nehru University, comes in response to his recent op-ed piece in the Indian Express where he comments on the events at Ramjas College, Delhi University on the 21st of February and in their wake, in Delhi University, on the 22nd of February]

Mr. Makarand Paranjape. In your analysis of the post-Ramjas fallout in Delhi University in Indian Express on the 4th of March, one can see that you have donned a “liberal” cloak. But there were way too many holes in that cloak to go without a counter and hence this response.

END_OF_DOCUMENT_TOKEN_TO_BE_REPLACED

For the second successive day, goons affiliated to the RSS-BJP backed right wing student mafia gang called ABVP (Akhil Bharatiya Vidyarthi Parishad) pelted stones and violently attacked peaceful assemblies of students and teachers in Delhi University. Journalists who were present were also beaten up. Phones and cameras and filming equipment were destroyed. An attempt was made to strangle a professor with his own scarf. He, and some other students who were injured had to be hospitalized. Luckily, they are shaken, but out of immediate danger. The incidents have been characterized as ‘clashes’ between right wing and left wing student groups by some sections of the media. Nothing can be further from the truth. These were not ‘clashes’. They were straight-forward one sided attacks by a mob intent on violence. A riot is not a clash. END_OF_DOCUMENT_TOKEN_TO_BE_REPLACED

We at Kafila have been receiving amazing statements of solidarity with JNU and its elected students’ President Kanhaiya Kumar over the past three days. We are posting them below, along with affiliations: South Asia University (teachers and students); Grinnell College, USA, Ambedkar University Delhi Faculty Association, Democratic Teachers Network, Hyderabad, and over a hundred students from Department of English, Delhi University.

We, the students of South Asian University, New Delhi (comprising of students from eight SAARC nations – Afghanistan, Bangladesh, Bhutan, India, Maldives, Nepal, Pakistan and Sri Lanka) strongly oppose the idea that one’s nationalism be defined in terms of hatred towards another nation (for example, Indian nationalism be defined as hatred towards Pakistan, or vice versa). We cherish the common cultural and social heritage of the South Asian region, and shall not let any kind of jingoist nationalism being endorsed by any religious group, political party or state hinder our shared solidarity. However, in recent times, such groups and establishments have unleashed an attack on democratic and critical voices in our universities across the South Asian region, masked under religious conformity, state intervention or sometimes in the form of an act of terrorism.

Thus, we stand in complete solidarity with the student and faculty community of Jawaharlal Nehru University (JNU) in their collective struggle against the ongoing police intervention by slapping the baseless charges of sedition on many students, including the arrest of JNUSU President – Kanhaiya Kumar, and against the massive propaganda terming the JNU as ‘a den of anti-nationals’. We would like to reiterate that our collective nationalism stands responsible only to the interests of our people and our land, and not to the divisive forces which have had and are still trying to create boundaries between us.

STATEMENT OF SOLIDARITY WITH STUDENT PROTESTS IN INDIA, FROM STUDENTS, FACULTY, AND STAFF OF GRINNELL COLLEGE 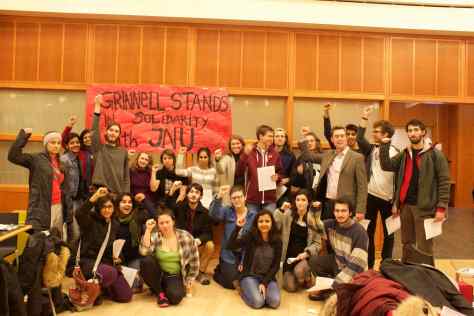 END_OF_DOCUMENT_TOKEN_TO_BE_REPLACED

JNU has entered an indefinite state of siege. Police have been swarming all over campus, raiding hostels, picking up students and interrogating them. The ABVP, predictably, have been directing them to the lairs of ‘anti-national elements’. When immense demonstrations of public solidarity with the accused students were organized, ABVP activists have attacked these, in one case mounting a violent physical assault on a visiting speaker. The JNU administration has gone to the extent of cutting off the power supply to the microphones used at a protest meeting. At Patiala House on Monday the 15th of February, the BJP’s MLAs and what appear to be a group of lawyers have assaulted JNU students, faculty and supporters in full view of the police, with what can only be regarded as smug impunity. More than one observer has remarked that this is the Emergency all over again.

It is clear that the arrayed forces of the central government are pitted against a campus which has long been an object of hatred for the Right. There’s no telling how matters will develop in the days and weeks to come. So it might be necessary to step back a bit and consider the sequence of events that led to the current situation.

In the past month, JNU students organized a protest meeting which raised the issue of Kashmiri rights, and drew attention – just as Rohith Vemula’s protest in Hyderabad had done – to the execution of Afzal Guru in 2013. Since the mainstream news outlets systematically censor any attempt to reopen that extremely murky case, it’s worth reminding ourselves of precisely why the execution was so controversial. The terrorist attack on Parliament in December 2001 produced a police investigation on which serious doubt was cast from the beginning. Afzal Guru’s laptop and mobile phone, key pieces of evidence, had not been sealed prior to investigation. One of the other accused in the case, a Delhi University lecturer (who was later emphatically acquitted) was viciously framed by Zee News, which used the police charge-sheet to make a documentary ‘establishing’ his guilt. The court proceedings were even more revealing. The Supreme Court admitted that there was no hard evidence to conclusively establish Afzal Guru’s involvement in criminal conspiracy. But these admissions were merely qualifications to what was perhaps the most extraordinary decision in the history of the judiciary in independent India. Afzal Guru was eventually hanged in 2013 on the basis that only this would appease ‘the collective conscience of the society’.

END_OF_DOCUMENT_TOKEN_TO_BE_REPLACED

In light of the glorious vigilantism being witnessed today, in which the lumpen lawyers at Patiala House are joining hands with Guardian of the Nation Horn-nob Go-Swamy on primetime TV A few years ago, finding myself in a heated but very enjoyable argument on why women change their surnames after marriage, somebody yelled from across the room, “What has JNU done to you?!”

I wasn’t surprised, only annoyed. Reducing my entire biography and political beliefs to an institution I attended once upon a time is a favourite pastime in India, when that institution happens to be JNU. I could have explained to the genius who shouted this that if I do have political opinions, neither were they surgically implanted in me at JNU nor will they wither away like the bourgeois state in Marxism if JNU ceases to exist. I should have been grateful that the JNU-phobia was posed through the formal courtesy of a query. Usually, it takes the form of a statement, “You JNU folk are all lunatics!”

In family settings, JNU-bashing is the preferred insult to shut down an argument, “It’s the JNU in you speaking!” At seminars, a question or a paper can be made illegitimate with the simple investigative exercise of determining if you’re from ‘a particular institution with a particular ideology’. Of course, the person asking the question has miraculously escaped institutions and ideology, remaining gloriously neutral in this fractured world.

END_OF_DOCUMENT_TOKEN_TO_BE_REPLACED 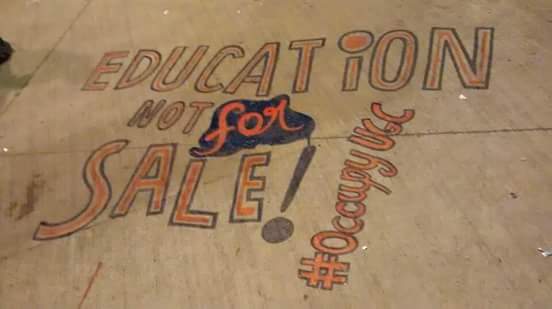 #SaveNonNETfellowship: A movement for ensuring democratic, inclusive and pluralistic research in India

“The ideas of the ruling class are in every epoch the ruling ideas, i.e. the class which is the ruling material force of society, is at the same time its ruling intellectual force.”

On the afternoon of 21st October, students from several universities in Delhi began ‘Occupying’ the Delhi premises of the head-office of University Grants Commission (UGC) –  the government mandated body under the Ministry of Human Resources that is supposed to govern the functioning of universities across the country.  The occupation continued through the night of the 21st, the day of the 22nd, and is still currently in process. The students occupying the UGC premises have decided, as of now, not to let the UGC function. Goons from the BJP aligned students organization Akhil Bharatiya Vidyarthi Parishad (ABVP) have now reached the UGC and are continuously harassing and abusing the student activists who are in ‘occupation’ of UGC. There is heavy police presence. There is a state of near siege at the UGC head quarters near ITO Chowk in Delhi.