This is a press release by the NARMADA BACHAO ANDOLAN 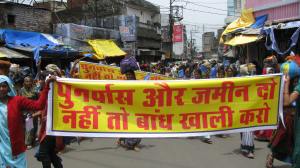 Thousands of oustees affected by the Indira Sagar, Omkareshwar, Maheshwar, Upper Beda and Man dam demonstrated in capital city Bhopal today and began their Satyagrah. Despite continuous rain in the entire Narmada valley, over 8000 men and women displaced persons have reached Bhopal to camp here for the next 5 days. The affected people demand that all the oustees of these dams should be rehabilitated and resettled with land and all other entitlements, and the injustice being wreaked on them for decades be stopped. Shri Alok Agarwal, senior activist of the Narmada Bacahao Andolan along with 4 men and women oustees have started their fast for 5 days in this “Narmada Jeevan Adhikar Satyagraha and Upwaas”.

END_OF_DOCUMENT_TOKEN_TO_BE_REPLACED

Recently a two-day North East People’s Convention on water and dams was held at Bethesda Youth Welfare Centre, Dimapur (on 17th May-18th May 2013) which brought together a group of 26 organisations from North East India under the banner of the North East Dialogue Forum. This forum called for a focus into the objectives raised in this two day convention, by writing to leaders of India, China and Bangladesh over the imminent adverse impact of the issue of water, impacts of constructing big dams and mining in various regions of North-East India. The outcome of this two-day North East People’s Convention on water and dams, is the joint appeal known as ‘Dimapur Declaration’.  At the time of this declaration, prime address was made to the Prime Minister of Bangladesh, Sheikh Hasina; the Premier of China, Li Keqiang and Prime Minister of India, Dr Manmohan Singh. The main objectives of Dimapur Declaration are:  to protect the inherent rights of local people over their water, land, forest and other resources based on customary and international laws as guaranteed by the Universal Declaration of Human Rights and UN Declaration on the Rights of the Indigenous People 2007 etc., and their self-determined development of their water bodies in the region. The recommendations of the World Commission on Dams, 2000 have also been given a special mention in terms of its implementation in all decision making processes on dam constructions over Brahmaputra (Tsangpo) River. “The Thatte-Reddy Expert Committee said the present hydropower work on Subansiri contravenes the basic premise of the Brahmaputra Board Act with regard to flood control, irrigation and other benefits. The report agreed that the present planning of the project ignored the flood control aspect. Therefore, the committee agreed that the very purpose of the project and purpose of the Brahmaputra Board Act is defeated and the mandate of the board diluted by this action,” opined Akhil Gogoi, Krishak Mukti Sangram Samiti ( KMSS). END_OF_DOCUMENT_TOKEN_TO_BE_REPLACED

New Delhi, December 26 : Tonight at 2:15 am Assam Police in collusion with other security forces swooped down on the protesters at Ranganadi who have been blockading the Highway since December 16 and thwarting state’s attempt to carry turbines and dam materials to project site of Lower Subansiri Dam. Nearly 200 people have been arrested and earlier also security forces have been harassing the ptotestors. In past too, Krishak Mukti Sangram Samiti fighting against the big dams on Brhamaputra have faced government’s ire and often been attacked and jailed. NAPM stands in solidarity with KMSS and other students groups of the region who have been consistently opposed to the Big dams in highly sensitive seismic zone. We condemn the sustained action and harassment of KMSS and their activists and targeting of Akhil Gogoi for constantly opposing the destructive development policies and corruption of the government machinery. END_OF_DOCUMENT_TOKEN_TO_BE_REPLACED