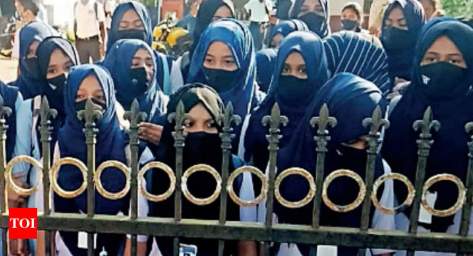 Images of educational institutions barring their gates to women in hijab are dense with implied violence. Used as we have become to the extreme physical violence on display during the period of this regime, both by state authorities and  by street mobs launched by Hindutva outfits,  in these images is captured in one frozen instant, the ideological violence of Hindu Rashtra.  Here is the marked and stigmatized  Muslim female body, exiled from the resources of the nation, kept out by iron gates, to be admitted only on the terms set by Hindutva.

But let us note that this is not “only ideological” violence, the power of which we have witnessed in plenty since 2014.  We know what terror “mere” words can threaten  – “love jihad”,  “gau hatya”,  “kapdon se pehchane jayenge” –  the last, the murderously weighted words of the Prime Minister himself, that those who protest the CAA can be identified by their clothes.

So ideological violence yes, but implicit physical violence too, held only  temporarily in abeyance –  what if the women decided to climb the gates and insisted on attending class? Or sat quietly on dharna outside? What kind of violence by private security and police would not be unleashed? Just before the pandemic,  did we not witness the brutality of police attacks on peaceful student protests against fee hikes in Delhi?

As more and more colleges in Karnataka deny women wearing hijab entry into colleges, and therefore their right to education, the RSS/BJP government of Karnataka backed such moves, invoking the Karnataka Education Act of 1983, Section 133 (2) of which states that students will have to wear a uniform dress chosen by the college authorities.  END_OF_DOCUMENT_TOKEN_TO_BE_REPLACED

I can hardly describe the joy and relief I felt reading your piece on the Hadiya case in the Hindu yesterday. By now I am nearly deaf from the cacophony of misogyny, islamophobia, and sheer short-sighted rage that CPM supporters on Facebook are unleashing against this young woman.

Your voice of sanity, Comrade, is therefore a great restorative. If not for your writing, one could have well thought that the CPM was nothing more than a bunch of short sighted, power hungry, strategisers, whose total lack of ethics and values is covered up by a vapid, outdated rationalism and an equally problematic liberalism. You refuse to condemn Hadiya for choosing Islam. You acknowledge that she is brave. You unequivocally reject the father and other minions of patriarchy. You rightly criticise state patriarchy evident in the Supreme Court. Unlike many CPM supporters here, you have no illusions about the times we live in; you are clearly aware that the NIA is not something which will spare us if we stay good. Importantly, you put paid to the idea that the High Court judgement that sanctioned her illegal custody was justified — an idea assiduously nurtured by certain public figures allied with the CPM against religious Muslims. Comrade, thank you again for being so forthright and in the face of snarling islamophobes in your own ranks actually gunning for the voice you raised against her illegal custody long back.