Dr. Khaleel Chishty, the 78 year old a renowned Virologist from Pakistan, will now go home very soon. A process that began on the 20th of April, 2011 will finally conclude at the Rajasthan end two months later precisely on the 20th of June, with the Governor signing the mercy petition that will let him go, once the MEA give their stamp.  END_OF_DOCUMENT_TOKEN_TO_BE_REPLACED

The historical division of society in South Asia on caste lines is now an acknowledged sociological, political and economic fact. However, caste as a literary or social discourse does not, for several reasons, form a part of the predominantly Muslim culture of Urdu. Nor has there been much academic exploration of the role caste plays in the life of South Asian Muslim communities as against others. As far as the Urdu literary writing is concerned, it has traditionally focused exclusively on the lives and concerns of conquerors, their cohorts and their descendants, who typically prided themselves on their real or perceived foreign origins. Even after modern, socially committed writing began in Urdu around the 1930s, caste as a variable for social exploration was largely ignored in favour of economic class. END_OF_DOCUMENT_TOKEN_TO_BE_REPLACED

For many of us in India he was Amitabh Bachhan and Dilip Kumar combined in one, although he did no action. His action consisted of something else altogether. He could play any character in the world, sometimes animals too. His impersonations of Dilip Kumar were sometimes better than the thespian’s own act. He could speak well, emote well, mimic brilliantly, parody, caricature, satirize and imitate almost anything and anybody. He could do all of this without appearing crude in the slightest way. His understated demeanour, his timing and his ability to retain a straight face through the most ridiculous of situations was more than a gift, through it he brought class to whatever he did. He has often been described as a comedian but if he was a comedian then he redefined the art of comedy and created a genre which could be performed only by himself. He was a one man entertainment industry and unlike film starts from this side of the border he needed nothing other than himself. He was his own writer, performer, director, presenter. Here was a fusion of an artist and his material that is rarely seen in the performance arenas in the subcontinent. END_OF_DOCUMENT_TOKEN_TO_BE_REPLACED

So on Facebook I saw a fellow Punjabi who lives in vilayat has listed his hometown as Toba Tek Singh, Pakistan, which I thought was very cool. Why didn’t I get this idea? Never mind, I thought, like all good ideas this must be stolen. My hometown on Facebook now is also Toba Tek Singh, Pakistan. It was only much after going mad over Manto’s story did I discover that Toba Tek Singh was a real place in west Punjab. Always wondered what its people thought about the story. END_OF_DOCUMENT_TOKEN_TO_BE_REPLACED 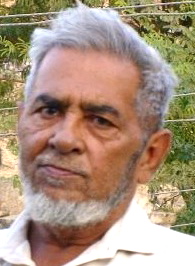 An appeal by AMNA CHISHTY

My father is almost 80 years old. He received his PhD from University of Edinburgh, Scotland in 1968 in Public Health Virology. He had an illustrious career as a professor and head of department of virology and microbiology at Karachi University. In the late 80’s he retired from his last job as the Director of Public Health at King Abdul Aziz Airport in Jeddah Saudi Arabia. He is a principled man who is well‐read, well bred and well traveled. He worked hard to raise a family of six children – one son (oldest, with engineering diploma), five daughters (one is a doctor, one is a Pharmacologist, two are graduates and myself an MBA in marketing). He educated us and built a house for us in Karachi and supported his younger brother in India as well. After retirement he wanted to live in that house in Karachi and enjoy his retirement with his family and his grandchildren.

The following events led to his current plight: In 1992 my father went to Ajmer to visit his ailing mother at his brother’s house near Dargah Sharif.  END_OF_DOCUMENT_TOKEN_TO_BE_REPLACED

So cricket is the opiate of the Indian masses, and India’s left-liberals (henceforth LLs) can’t deal with it. Or with popular cinema or religion, for that matter. All of which are things that these oh-so-serious people can’t quite seem to fathom. The only cinema you should enjoy are art house/multiplex films with the right ‘social message’, the only religion you can profess is Sufism and the only cricket you are allowed to enjoy is West Indies winning a test match, because CLR James has apparently said it’s ‘empowering’ or  ‘anti-imperialist’ or some such. These trivialities – cinema, religion, cricket – are just there to distract people from the really important issues. We should all only obsess about ‘important’ topics like nuclear energy, the 2G spectrum scam or the UID. END_OF_DOCUMENT_TOKEN_TO_BE_REPLACED

To make our point against jingoism.

To say that no one needs a cricket match to prove their patriotism.

To hope the best for those we’re told we should hope the worst for.

Please join this Facebook Event page and ask your friends across the border to do so, too.

If you click on it, you can also see the rest 3 parts of the show with Veena Malik and a maulvi on Pakistan’s Express TV.

Everyone is losing its plot in Kashmir — be it separatists, mainstream political parties, New Delhi or Pakistan. The biggest losers in the unarmed but stone-laden street uprising are Pakistan and separatists.

The failure of Pakistan in shifting paradigm of new realities in Kashmir can be gauged from its dwindling influence over separatists’ spectrum. It failed to unite fractured separatists to its 1992-like unified forum politics despite placing in half-a-dozen interlocutors between warring factions of the All Parties Hurriyat Conference led by Sayed Ali Shah Geelani and Mirwaiz Umar Farooq.

Its influence over separatists’ spectrum has been wavering and waning. It was after former Pakistan President Pervez Musharraf pick-and-choose policy that saw separatists cocooning and ensconcing their politics as per the public mood in Kashmir. If Musharraf’s four-point formula convinced moderate Mirwaiz Umar Farooq, many hard-liners like Sayed Ali Shah Geelani and United Jehad Council chief Sayed Salahuddin rejected it. END_OF_DOCUMENT_TOKEN_TO_BE_REPLACED

There have been several news reports recently about attempts by the builder Mafia to capture properties near the Jama Masjid in Shahjehanabad (popularly, known as old Delhi) to build a 100 room hotel. Reports have also suggested the involvement of a local politician, though the politician has refuted the allegations very firmly.

This piece is not about the builder mafia or the local politician, but about another issue that has cropped up during the investigation of the attempted land grab. It has been found that the ownership of one of the properties is under dispute and a case has been going on for close to two decades.

Muslims, who had lived in Shahjehanabad for generations, some for centuries like the families of my ancestors. END_OF_DOCUMENT_TOKEN_TO_BE_REPLACED

Once it is granted that in India we practise a different kind of secularism, a secularism which is unique to us, it becomes very difficult not to grant the same status to Pakistan, Bangladesh, Sri Lanka and Nepal. This may seem bizarre given the fact that religion seems to pervade life in all these places, and a struggle over the definition of the state continues everywhere. However, defining oneself is different from the way one may be read. Many an avowed Muslim appears highly heretic to others. In fact the contemporary state, given the kinds of tasks of enumeration, surveillance, discipline and welfare that it is asked to command can only ever be secular, a fact that the Emory based legal scholar Abdullah Bin Naimi has been trying to hammer home to different kinds of Muslims over the last decade. For more of his works one can go to here and here.

The reason I bring this up in particular relates to the case of Pakistan. An avowed Islamic state, it has found it difficult to satisfy the urgings of different kinds of Islamists. And indeed it never can do so simply because protecting its citizens and assuring them equality is also one of its declared goals. The clash between the principle of treating each citizen as an individual, equal before the state, and the demands of different kinds of communities which may be ethnic, linguistic, regional or religious is precisely the playground of struggle that all South Asian, and now some European, states grapple with in their pursuit of secular goals. END_OF_DOCUMENT_TOKEN_TO_BE_REPLACED

END_OF_DOCUMENT_TOKEN_TO_BE_REPLACED

Believe it or not, that is one of the findings of a new survey on Kashmir, conducted in both India and Pakistan.

And some more disbelief here:

A majority of Pakistanis say Pakistan’s government does not provide support to militant groups that conduct attacks against civilians in India, while a majority of Indians tend to believe it is providing support. END_OF_DOCUMENT_TOKEN_TO_BE_REPLACED