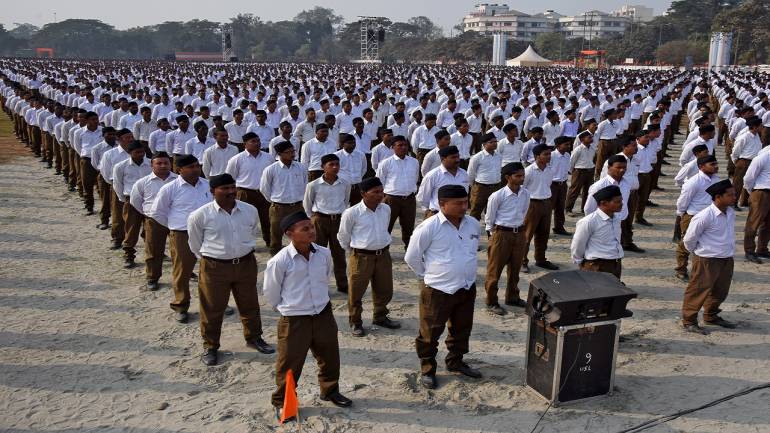 The recent spate of attacks on dalits in the state is an indicator of the fact that the unfolding project of RSS’s Hindu Rashtra has entered a new phase where the community is being construed as the ‘new other’.

When I was born, I was not a child

I was a dream, a dream of revolt

that my mother, oppressed for thousands of years,

Still it is untouched in my eyes

Covered with wrinkles of thousand years, her face

have watered my body….

‘You are Welcome to Enter … Village of Hindu Rashtra’!

It was around two decades ago that headlines in a few national newspapers reported the ‘arrival’ of Hindu Rashtra in parts of Gujarat. A few inquisitive journalists had even displayed photographs detailing the nascent phenomenon then.

The shock generated by the news died down in a short while.

Hardly anybody then could have a premonition that it won’t take much time for the idea of Hindu Rashtra to gain wider acceptability across India with a commonsense gaining ground rather getting consolidated where religious minorities were increasingly understood as ‘the other’.

Could it be said that the recent spate of attacks on dalits — leading to at least three deaths in the past one month in the same state, coupled with growing instances of life of insecurity of many concerning their lives or their continued deprivation by the dominant castes, is an indicator of the fact that the unfolding project of Hindu Rashtra has entered a new phase where dalits are being construed as the ‘new other’, one who could wreck the project of ‘Hindu Unity’ from within.

Perhaps it is too early to draw any such conclusion, but portents are there for everyone to see.

I am an Indian, but a separatist too. I am hostile against Kashmiri people because I only love my fellow countrymen.

The feeling of separatism among the people of a bordering state is easily identified. But there are two types of separatism. In a state or region like Kashmir and North – Eastern states, separatism is identified in such a way that there is a group or more than one group of people who want to secede from Indian nation and they carry out “actions” to fulfill this desire. They try to galvanize public support through their “actions” and harm government machinery as well. But have we ever identified the separatism that is professed by the majority section of the society?

I belong to a Hindu family of north India. Right from the beginning, a separatist feeling against Kashmir has been cultivated within me. A survey can be conducted in entire north India to know how a relationship with Kashmir has been nurtured among the people of this region during their childhood. If I ask 100 children, they all know Kashmir only through the materials available in media. I want to repeat the story how I was introduced to Kashmir. I was born in the early years of 1960s.  While going to school or returning back, I was told that Kashmir has a separate flag which is different from Indian tricolour. Like prime minister of India, it also has a prime minister. There is a separate section in Indian Constitution for it and Muslims are in majority there. Since Pakistan follows Islam, therefore loyalty of Kashmir people is also doubtful. END_OF_DOCUMENT_TOKEN_TO_BE_REPLACED

Ever since the present Modi government came to power, there appears to have been a clear set of orders issued from the Rashtriya Swayamsevak Sangh (RSS) headquarters to its student organization, the Akhil Bharatiya Vidyarthi Parishad (ABVP), to go on the rampage in university campuses all over India. From getting specific parts of syllabuses changed under threat of violence, disrupting events by other student organizations on campuses, to forcing university administrations to intervene to curb freedom of expression, to filing police complaints against dissenters, they seem to have been acting according to a well rehearsed script, subverting democratic processes on campuses. After its recent electoral defeats in JNU and Hyderabad Central University (HCU), however, the ABVP’s role seems to have acquired an even more virulent feature. The game plan appears to be to provoke violence wherever possible so that rather than any kind of debate, however contentious, on issues such as nationalism, minority rights and caste injustice, what we are increasingly likely to see are violent standoffs between student groups, which have to be controlled by the police. These are often represented in the media as brawls between students, as if there were no ideology or political content involved, just two groups of students “clashing.” But of course, in each case ABVP is involved, and in some kinds of reporting it can even be made to appear that ABVP was somehow the victim.

This is the moment at which teachers need to finally accept that ABVP is not just another student organization. We have tended to take the position in our universities that we must not condemn or directly address ABVP, since we must not directly involve ourselves in student politics. Teachers must talk to administration, be publicly critical of its lapses, take all measures necessary to display and enact our solidarity with students under attack by this regime. While students take their own decisions on modes of struggle and so on, teachers see our role as supportive but with a critical distance.

However, now we may need to start thinking of ways in which we  recognize the organization of the ABVP as a serious threat to Indian democracy. I don’t mean individual students, who would also be in our class-rooms, and with whom it may still be possible to continue a conversation, and whose examinations we will continue to grade with utmost probity. as we have always done.

But the ABVP as an organization has a specific role to play, as storm-troopers in the project of Hindu nationalism, and we cannot afford any longer not to face up to this fact frontally.

END_OF_DOCUMENT_TOKEN_TO_BE_REPLACED

Anyway, the matter has become bit urgent with the feverish preparations which are going on here for the battle royale which would take place in the year 2014 and the not so silent emergence of NaMo on the national scene and the daily dose of half truths, fiction and complete distortion which goes under the name of oratory. END_OF_DOCUMENT_TOKEN_TO_BE_REPLACED