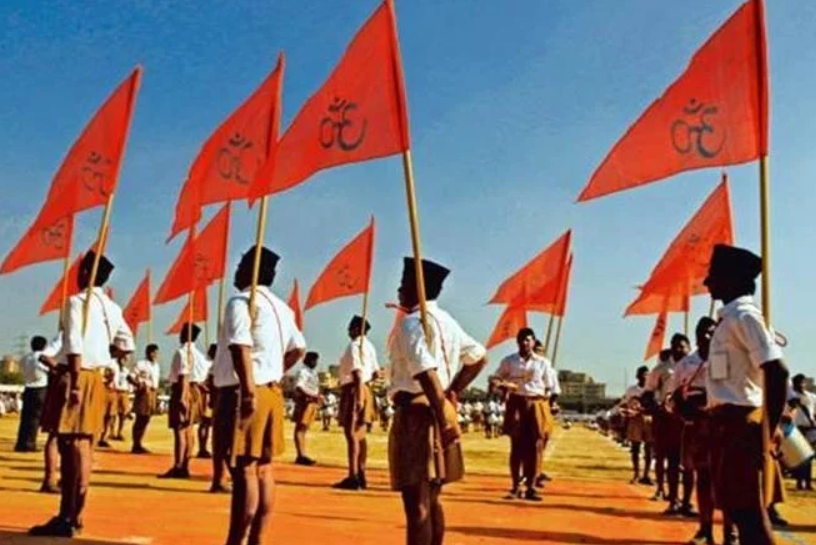 There are a few photographs which the bigwigs of the Hindutva Brigade/Sangh Parivar would like to be erased from public memory. One such photograph shows Sadhvi Pragya, an ex-member of the ABVP, sitting with Shivraj Singh Chouhan, Chief Minister of Madhya Pradesh, Rajnath Singh and few others. As it was later revealed they had gathered to console the widow of a BJP leader from MP, who had just died.

Public memory is very short but one can stretch it a bit to recollect the tremendous consternation in BJP/RSS circles when Sadhvi Pragya was arrested by the Anti Terrorist Squad led by the legendary police office Hemant Karkare on 23 October, 2008 for her alleged role in the 2008 Malegaon bomb blast. This photograph had suddenly gone viral when there were denials by many leaders of the saffron brigade that they had never met her.

Now that the NIA, the federal agency established by the government to combat terror in India, has given a ‘clean chit’ to Sadhvi Pragya and few of her accomplices, should one expect that all those photographs showing her proximity to various leaders of the saffron establishment would be prominently exhibited? It must be remembered that leaders of BJP have even claimed that it was an act of “treason” to arrest her.

(Unconfirmed rumors about the phone answer given by the most powerful man to Ehsan Jafri, when the latter called up the Gujarat administration for protection from the mobs during the Baroda riots in 2002.  Jafri was slaughtered and hacked limb from limb soon after the protection he sought was withdrawn, or rather never provided.)

algorithm:  noun, a process or set of rules to be followed in calculations or other problem-solving operations, especially by a computer.

While effort after effort was made to establish the culpability of Narendra Modi for the Gujarat riots, they all failed to produce any evidence that was acceptable in a court of law.   News records speculate that the administration, on direct orders, turned a blind eye to the rampage of the mobs.[1]

Much was made of his innocence, and after more than a decade of political exile, Modi has risen as the star of the BJP’s ruling formation since the last election.

India’s national development now is touted as set to occur at a blistering pace crossing 7% in the coming years.  This is the redoubtable Gujarat model where industrial development is paralleled by stagnant or retrogressive movement of all indicators of social development and well being.

Key to understanding the significance of this is the unpacking of the term ‘national development’ in the Modi mantra (the name being convenient shorthand for the BJP and the rising class which supports it).

What does ‘national development’ signify for the BJP and its supporters?  How should this ‘belief’ in the nation be read?

To understand this, it is important to look at the spate of responses of the right wing to recent events. END_OF_DOCUMENT_TOKEN_TO_BE_REPLACED

Anybody with a passing interest in consistency or coherence might be forgiven for being stumped at the political spectacle unfolding right now. Yesterday, Prime Minister Narendra Modi assured us that his government was committed to reservations. The statement was made at a ceremony to inaugurate the Ambedkar memorial at the Indu Mills compound in Mumbai. The fact that ordinary Dalits, in the habit of thronging any joyous celebration on Ambedkar in big numbers, were kept out of the ceremony, is possibly irrelevant. After all, officialese is officialese, and no political party – certainly not the BJP – has a monopoly on stiff-necked commemorations of people’s leaders that want nothing to do with the people. It is Modi’s commitment to reservations and the Indian constitution that is of interest. In some ways a statement of this nature made at the inauguration of an Ambedkar memorial, makes perfect sense. Apart from the occasion and locale, also not coincidental was the timing of Modi’s statement – one that he himself alluded to, when he referred to the bitterly fought Bihar elections now underway, “With a BJP government in power and polls getting under way, a malicious propaganda is being spread that the government is against reservation…”. The fact that the anti-BJP mahagathbandhan (grand alliance) in Bihar has made reservations one of their chief planks, with Lalu Prasad Yadav declaring in his inimitable style that he will kill himself if reservations are removed, is relevant.

Zooming back from the Ambedkar memorial event, the PM was clearly also responding to the threat to his Sabka Saath Sabka Vikas model begun a couple of months ago by the irrepressible Hardik Patel. Patel – erstwhile BJP supporter, self-styled Patidar-Patel revolutionary and a wild child in imminent danger of being silenced (or coopted) by the BJP – was temporarily subdued by the Gujarat administration following the wave of violence over his first call for reservation, but resurfaced a couple of days ago to be the nightmare Modi hadn’t dreamed yet – saying his aim was to expose the “Gujarat model of development”. This is for the current party nothing short of the youngest born of a rambling illustrious family running into the street from the family mansion saying our house is made of mud! our house is made of mud!

END_OF_DOCUMENT_TOKEN_TO_BE_REPLACED

The Loksabha election results of 2014 surprised everyone. They are beyond the wildest dreams of even the most ardent BJP and Modi supporters, and worse than the worst scenarios imagined by  BJP’s political opponents. Even though these elections results are singularly stunning, phenomena like these have diverse reasons. A comprehensive understanding and meaningful response require that all these reasons be dispassionately explored and evaluated.

First, the votes behind these results. BJP polled 31% of votes. Never before has a party with so few votes won a mjority in national elections. Clearly, the first past the post system has benefited it disproportionately, more than any other ruling party in the past. This electoral system has amplified the BJP victory and made it look so impressive.  However, BJP’s electoral achievements in other domains must not be discounted. For the first time it managed to dislodge the Congress as the main party to represent Assam in the Lok Sabha. Fighting alone, it garnered 17% of votes in West Bengal and made determined bids in Tamil Nadu and Kerala. In all states where it fought a straight battle with the Congress, its vote share was above or close to fity percent. It ran the most expensive and well organised campaign. Among all contestants, only it appeared determined to win and left no stone unturned to achieve its objective. It played the communal card astutely in UP and Bihar, with full paraphernalia of communal riots, started more than a year ago, and unabashed use of Hindu religious symbols. At other places it was the ‘development’.  The BJP victory is actually Mr Modi’s victory. For the first time since Mrs Indira Gandhi after  the 1971 and 1980 elections, a single person has come to acquire such a mandate at the national level.  These results show a significant shift of electoral politics to the right and marginalisation of non-communal forces. END_OF_DOCUMENT_TOKEN_TO_BE_REPLACED

Bombs always make news – even when they do not explode.

Terrorists of various stripes as well as criminals know it very well. And they time their actions accordingly.

Bombs – even if they do not explode – or even when they cause symbolic damage have an added traction for the politicos of the right. They pay rich dividends.

It is one of the easiest things to stigmatise, terrorise a community, a people. In an ambience where all such anti-human acts are projected as handiwork of the ‘other’ it takes very less time to polarise the ‘us’. It is common knowledge that the vitiation of atmosphere is so immediate and complete that all talk of harmony and composite heritage can just evaporate in a fraction of a second and the saner elements within can suddenly find themselves on the margins.

Kagal, a town in Kolhapur district, was witness to such an incident, where the police discovered a bomb making factory in the Lakshmi Hill near MIDC area. The culprits involved in this action could be nabbed before they could ‘operationalise their bomb’.

The gravity of the situation could be understood by the fact that police could bust this criminal module on the eve of Narendra Modi’s proposed rally in that area. It has arrested four youths who were involved in the operation. While Ajinkya Manohar Bhopade(22) and Aniket Bhivaji Mali(22) belong to Chokak village in Hatkananagale, Nilesh Babanrao Patil (20) is from Male Mudshingi, in Hatkanangale and Anil Popat Kharase (26) hail from Kabnur-Ichalkaranji in Hatkanangale. Patil and Kharase supplied material for bomb making and Bhopade – who has a diploma in electronics and Mali – who works as wireman have been arrested for making bombs. END_OF_DOCUMENT_TOKEN_TO_BE_REPLACED

1. For enfeebling the validity and credibility of evidence presented by me to Judicial & Investigating bodies and to denigrate my image, the publicity managers of the Chief Minister of Gujarat State, Shri Narendra Modi and the Sangh Parivar, are widely propagating many lies about the motive and time frame of submission of evidence by me against authors of 2002 anti-minority bloodbath. A totally blatant falsehood spread about me is that I had brought out incriminating material against those responsible for 2002 carnage and subsequent subversion of the Criminal Justice System (CJS) ONLY after my super-cession in promotion to the rank of Director General of Police (DGP) in February, 2005. This contention is utterly baseless, false, malicious and misleading.

2. The real truth in this matter is given below:-
http://dilipsimeon.blogspot.in/2013/06/public-appeal-by-rb-sreekumar-former.html